Here is your short paragraph on the the structure of Tropical Cyclone!

A fully developed tropical cyclone has a central calm area where the weather is quiet with calm winds. This area is known as ‘eye’ of the cyclone with a diametre varying from 10 to 100 km. The pressure is lowest and temperature is highest in this region with either clear or partly cloudy skies.

Surrounding this area there is a zone of strong winds with clouds extending vertically. This area is called ‘wall cloud’ zone and is the area of maximum winds.

Surrounding this region, winds spiralling in a counter clockwise direction in the northern hemisphere, extend outwards to great distance, with speeds gradually decreasing as we move further away from the centre. The wind speed also decreases towards the eye area. The winds rise upward while rotating around the centre and resemble the ‘coils of a snake’. 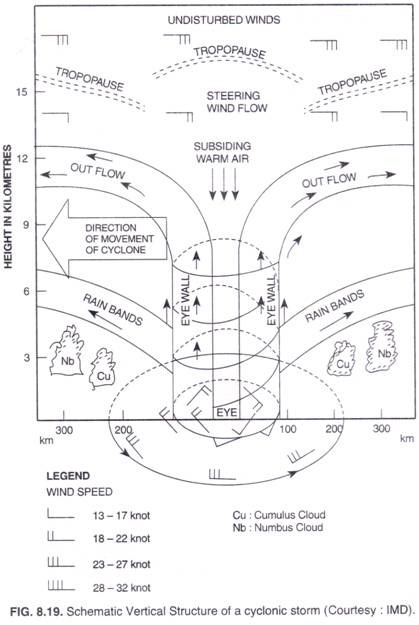 The eye of the tropical cyclone is surrounded by walls of clouds arranged in the form of hollow cylinder. This wall cloud zone constituted the most hazardous zone of tropical cyclone, as winds here are extremely strong and rainfall is very heavy.

Clouds outside the ‘wall cloud’ are arranged in bands which merge with the ‘wall cloud’ or central portion of the cyclone. Because of this special nature of the clouds, the tropical cyclones are easily detectable in satellite and radar cloud photographs. One such satellite imagery is shown in Figure 8.20. Tropical cyclones have large pressure gradients 14-17 mb/100 km.

In some cyclones it is as high as 60 mb/100 km. The cyclone moves forward at an average speed of about 20 km per hour. As soon as the cyclone moves over the land, its energy, because of the absence of sea water, starts decreasing. This leads to the death of the cyclone. The cyclone lasts for five to seven days.

Welcome to Shortparagraph.com! Our mission is to provide an online platform to help students to discuss anything and everything about Paragraph. This website includes study notes, research papers, essays, articles and other allied information submitted by visitors like YOU.

Before publishing your Paragraph on this site, please read the following pages: