The ecosystem is the basic structural and functional unit of ecology.

The term ecosystem was first proposed by Tansley in 1935.

Traditionally, an ecosystem is defined as any unit that includes all the living organisms (the community) in a given area interacting with the physical environment so that a flow of energy leads to clearly defined trophic structure, biotic diversity and material cycling between the abiotic and biotic components within (Ramakrishnan, 2001). The ecological study of ecosystems or “Ecosystem ecology” is considered as the most important aspect of ecology.

Thus all natural ecosystems are self sustaining since there is continuous flow of energy and nutrient cycling, while all human managed systems are more or less dependent upon energy subsidy that is external to the system. 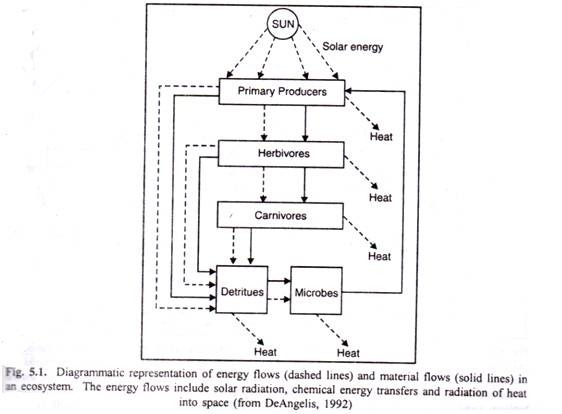 Depending upon the species diversity and the manner in which they are organized, we can recognize the ecosystem types such as aquatic, marine, forest, grassland and agro-ecosystem. These typologies are determined not only by the species composition but also by the physiognomic characteristics and soil and climatic conditions. Freshwater ecosystems are usually named after the size and nature of the freshwater body such as pond, lake, and river.

A wetland ecosystem, looking outwardly, presents an intermediate condition between an aquatic and a terrestrial ecosystem. The largest ecosystem on this earth is ‘marine ecosystem’, which consists of several subdivisions, each having its physicochemical and biological characteristics. For example, in the deepest ocean producers are absent, but many other organisms survive there as they are dependent for food on the dead organic matter coming from the upper layers of the ocean.

Welcome to Shortparagraph.com! Our mission is to provide an online platform to help students to discuss anything and everything about Paragraph. This website includes study notes, research papers, essays, articles and other allied information submitted by visitors like YOU.

Before publishing your Paragraph on this site, please read the following pages:

We use cookies on our website to give you the most relevant experience by remembering your preferences and repeat visits. By clicking “Accept All”, you consent to the use of ALL the cookies. However, you may visit "Cookie Settings" to provide a controlled consent.
Cookie SettingsAccept All
Manage consent

This website uses cookies to improve your experience while you navigate through the website. Out of these, the cookies that are categorized as necessary are stored on your browser as they are essential for the working of basic functionalities of the website. We also use third-party cookies that help us analyze and understand how you use this website. These cookies will be stored in your browser only with your consent. You also have the option to opt-out of these cookies. But opting out of some of these cookies may affect your browsing experience.
Necessary Always Enabled
Necessary cookies are absolutely essential for the website to function properly. These cookies ensure basic functionalities and security features of the website, anonymously.
Functional
Functional cookies help to perform certain functionalities like sharing the content of the website on social media platforms, collect feedbacks, and other third-party features.
Performance
Performance cookies are used to understand and analyze the key performance indexes of the website which helps in delivering a better user experience for the visitors.
Analytics
Analytical cookies are used to understand how visitors interact with the website. These cookies help provide information on metrics the number of visitors, bounce rate, traffic source, etc.
Advertisement
Advertisement cookies are used to provide visitors with relevant ads and marketing campaigns. These cookies track visitors across websites and collect information to provide customized ads.
Others
Other uncategorized cookies are those that are being analyzed and have not been classified into a category as yet.
SAVE & ACCEPT